For annuals like A.thaliana the relative importance of escape, avoidance, and tolerance depends on the characteristics of the growth environment (Passioura 1996, Araus et al. 2002, Chaves et al. 2003). A.thaliana is native to a wide variety of environments with varied drought pressures. Fall germinating accessions [that require rosette vernalization for flowering] differ from spring germinating accessions in exposure to periods of intermittent water shortage during the seedling and rosette stages. Further, unpredictable periods of water shortage are more likely in low spring precipitation areas than in areas with high spring precipitation. In both types of environment, dehydration tolerance and avoidance are likely important for seedling survival and dehydration tolerance is a component of freezing resistance. Our experiments indicate large variation among ecotypes in the ability to recover after loss of ~20% leaf water content and wilting, plus >7-fold differences in proportion surviving (56 to < 8%) after 16 days without watering. In ecotypes from other locations, greater reliance on stored soil moisture would maximize the importance of escape by rapid flowering or efficient water acquisition and use, depending on the intensity and predictability of ‘season-ending’ or ‘terminal’ drought. We use the natural variation of A.thaliana from a great diversity of environments to assess networks of traits that allow it to resist drought by combinations of tolerance, avoidance and escape.

CO2 uptake (photosynthesis, A) and water loss (transpiration, E) both occur through stomata, resulting in a tradeoff between acquiring CO2 for growth versus losing water; this is a fundamental constraint on land-plant form and physiology. For many plants, dehydration avoidance is achieved largely by plastic stomatal regulation (Buckley & Mott 2002, Comstock 2002). This minimizes water loss and can be a rapid and effective strategy; however, it results in reduced CO2 uptake and growth (Schulze 1986, Geber & Dawson 1997). The efficiency with which plants fix CO2 relative to their rate of H2O loss is called water use efficiency (WUE=A/E), and when high, WUE can mitigate the tradeoff between CO2 uptake and H2O loss. If certain conditions are met, WUE can be estimated by the stable carbon isotope composition of plant tissues (13C), which provide a time-integrated index of WUE (Farquhar et al. 1989, Dawson et al. 2002). D13C is the ratio of the amount of 13C to 12C isotopes in a sample relative to a standard. Variation in D13C can be generated by variation in either photosynthetic capacity or stomatal constraints on diffusion of CO2 to the leaf interior and chloroplast. D13C has been successfully used to investigate the role of WUE in drought adaptation in many studies (e.g. Comstock & Ehleringer 1992, Martin et al. 1999, Dawson et al. 2002).

We have explored natural genetic variation in D13C among Arabidopsis accession as an indicator trait for lifetime integrated WUE. There is consistent constitutive variation in stable isotope composition (D13C) among ecotypes, with a range of more than 2.8 ‰ between the extreme high and low water use efficiency (WUE) ecotypes in the panel. This range in D13C is more the 2-3 fold greater than the differences that have been documented between NILs capturing d13C QTL (e.g. 0.8 to 1.1 ‰; Juenger et al. 2005, Masle et al. 2005). Consistent with theory and with experiments in those studies, a 2.8 ‰ variation in D13C represents a 64-77 % difference in whole plant transpiration efficiency (TE; biomass production/cumulative water use). Such large differences among lines in water use during biomass production are important for avoidance and tolerance of drought and are likely to have great evolutionary importance in water limiting seasons or habitats. 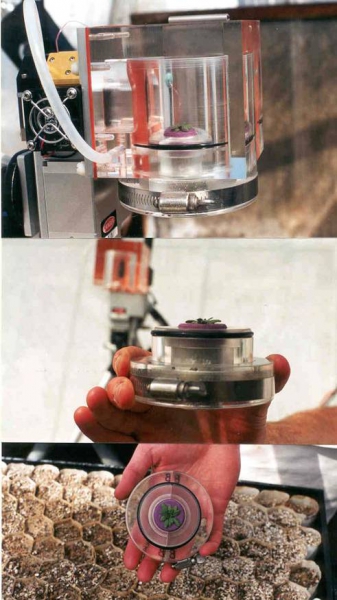 John McKay, Jim Richards, and Ken Shaw (see McKay et al. 2001, 2003) have constructed a whole-canopy chamber for our studies of ecophysiology and drought avoidance in Arabidopsis thaliana. This cuvette, when used with the Licor-6400, overcomes problems with single-leaf measurements. Whole-canopy measurements obviate the need to scale from leaf to whole plant and provide excellent sensitivity because of the larger leaf area included in the cuvette. This system allows accurate and rapid measurement of CO2 (A) and H20 (E) exchange. The whole-plant cuvette incorporates a leaf temperature thermocouple that interfaces directly with the LI-6400. Instantaneous WUE (A/E), stomatal conductance (g), and other variables can be calculated from these measurements. We have phenotyped a number of Arabidopsis accessions, nearly-isogenic lines, and mutants for basic physiological measures or gas-exchange.

We consistently find, in experiments in different environments (UT and UCD), theoretically expected correlations between D13C and the ratio of leaf internal to ambient CO2 concentration (ci/ca) (Farquhar et al. 1982), as well as with TE. The large differences in D13C and WUE between ecotypes is based on independent variation in both stomatal conductance (gs) and photosynthetic capacity (Amax) among the ecotypes that we have phenotyped extensively (see lower panel at right and Juenger et al. 2005). Although low WUE lines tend to have higher stomatal conductance, it is apparent that Amax varies nearly 2-fold within both the extreme high or low WUE groups and that there is substantial overlap in g between the groups. Differential and independent regulation of stomatal opening, photosynthetic capacity, and the interaction between these traits suggests substantial differences in functional gene networks among the lines.

Arabidopsis thaliana populations have been observed in northern Scandinavia (northern Norway, Sweden and Finland) south to north Africa (Morocco), and east through Europe, Central Asia, China, Korea, and Japan. Introduced populations have been found in the USA and Australia. This species range encompasses enormous coarse scale variation in climate (patterns of precipitation, temperature, and seasonality) as well as considerable local habitat differentiation. We have developed a core collection of inbred Arabidopsis ecotypes collected from around the work by compiling accessions deposited by researchers to a number of Arabidopsis stock centers. We have archived genomic DNA and seed from this core collection and have completed a number of common garden experiments and genotype screens using this material. To date, we have completed both progressive drought and drought tolerance experiments using this panel and have screen a variety of phenotypes including fitness components (fruit production, seed production), flowering time, rosette size, inflorescence architecture, and integrated lifetime WUE measured by carbon-isotope ratios (see Ecophysiology link for more details). In general, we have observed remarkable levels of genetic variation within this panel of Arabidopsis genotypes.

We are studying the genetic basis of WUE in Arabidopsis by exploiting the natural variation in WUE in a genetic cross between two diverged ecotypes, Landsberg erecta (Ler; relatively higher WUE) and Cape Verde Islands (Cvi; relatively lower WUE). We have shown that five loci in the Ler x Cvi mapping population have small to moderate effects on WUE. Two of these loci appear to colocalize with loci affecting flowering time; previous work from our and other labs has shown correlations between flowering time and WUE.

We have captured a 45 kb region of chromosome 2 from the Cvi genome in a Ler background, and have confirmed that this introgression contains a locus affecting a difference in WUE. We have identified several promising candidate genes and are currently using transgenics to identify the gene (or genes) responsible for the difference in WUE observed on this chromosome in the Ler x Cvi cross.

To complement our ongoing work using QTL mapping to study the genetic basis of plant physiological traits, we are also studying the population genetics and functional variation in candidate genes known to play an important role in plant-water relations. Because evolutionary processes are strongly affected by the amount and kinds of genetic variation segregating in populations, we are interested in determining the effects and distributions of natural mutations both in the genome and in nature. While local adaptation to climatic variables is widely documented in Arabidopsis and other plant species, little is known about which genes (sensor, signaling, regulatory, effector?), what kinds of mutations (cis/trans-regulatory, coding, non-coding RNA, epigenetic?), or even which evolutionary forces shape these different strategies. We make use of the incredible resources now available in Arabidopsis including, but not limited to, expression arrays, transgenics, T-DNA knock-outs, large SNP panels and, soon, complete genome sequences of 1001 ecotypes.

Genome-wide expression analysis has shown that thousands of genes are affected by drought stress in the Columbia accession. Many of these genes are upregulated in an apparent effort to protect the plant from damage, while many others are downregulated, perhaps as an effort to slow normal physiology and development during sub-optimal conditions. As part of the Arabidopsis 2010 program, we have conducted a series of controlled dry-down experiments to help annotate unknown genes, identify genotype by environment interactions and map eQTL associated with drought-stress response. These studies have involved natural accessions that we have previously identified as showing diversity in drought adaptation phenotypes. Along with John McKay we have also developed a novel RIL population from two of these extreme accessions. 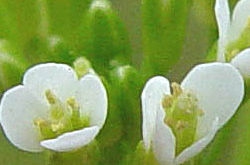