Due to the interest received towards development/programming, in this blog post we're going to take the time to detail how to get started with web development using a local virtual machine environment.  We'll also go over how to write a simple "Hello World" script in PHP.

Here are a few guides we find reputable that you can follow:

Once you have installed vagrant, you're ready to begin.

Vagrant comes with pre-packaged VMs that make it easy for a user to get started.  Vagrant is basically an interface between the user and VirtualBox allowing for pre-configured items to be setup.  For this example, we're going to use "Scotchbox" – https://box.scotch.io.  This is a pre-packaged VM that comes with several features and a sync'd folder already setup for convenience.  There are many different boxes that you can use and different ways to add them (there's even a box add command in vagrant that you can use).

For simplicity, we're going to just clone the git repository for scotchbox to get started.

This should put a 'public', 'vagrantfile', and '.gitignore' file in that directory along with a hidden .git directory.

Next, open a command prompt (in Windows) or a terminal (in Linux) and cd to the directory that the Vagrantfile is in (where you cloned the repository).  In the directory where the vagrant file is in, issue the command: vagrant up

After this is finished, your virtual machine should be running.  To confirm that the VM is running, you can issue the command:

Connecting to the Vagrant Box

Vagrant boxes come with a variety of different credentials and setups, depending on the box.  You can check the configuration by issuing:

in the directory of your vagrant file.  You'll see something like this.

If you have an ssh client installed in your PATH (for windows) you can just issue the command:

to connect to your VM with the private key.  Otherwise, you can use PuTTY (or your favorite ssh client) to connect to:

You should authenticate successfully and be able to confirm that you are connected and see the MoTD below: 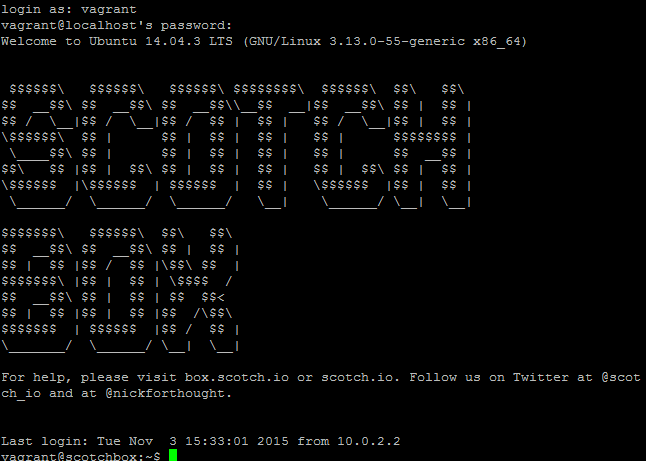 (If you don't, you should confirm that your Vagrant VM is up and running.)

So, where is this pulling from on the server, you might ask?  It is actually your sync'd folder.  On the server it is located at /var/www/public/index.php .  In your sync'd folder (where your vagrantfile is), it is located in the "public" directory (part of the stuff you cloned in the past).  So now you're pretty much free to drop anything into the public folder and see it served by web on the scotchbox.

Here is a list of credentials if you do not wish to keep the default index.php file (you can also rename the file to index_old.php and be able to access it at http://192.168.33.10/index_old.php) :

The nice feature about the sync'd folder is that it allows for you to edit your files on the web using whatever IDE that you want on the host machine.  Your changes automatically propagate to the virtual machine and are loaded.  This also means that you also have the choice to perform git commits from either the host or the virtual machine.

In the public directory of your vagrant box (/var/www/public/ or the "public" folder in "scotchbox" folder on the host machine), create a new file named "HelloWorld.php".

Next, copy paste the following code into the file:

When you are ready to shut down your virtual machine, follow these steps:

Anytime you want to start back up, just navigate into the directory, run a 'vagrant up'; and the machine will boot up.  You should shut down your virtual machine before shutting down your computer to avoid any issues.

In the same directory as the vagrant file, you can destroy the machine by typing:

This removes the machine from VirtualBox.  You can start it up fresh again afterwards by issuing

in the directory of the Vagrantfile.  This is typically only recommended if an issue develops with the VM.

Written by Ryan Parker, Software Developer/Analyst
Questions or comments? The best and easiest way to contact us is via the CNS Help Desk form.