Our túngara colony was established by Christina Gridi-Papp in 2000. We are currently maintain over 200 frogs from both genetic clades of the tungara frog. We use sterile sphagnum moss for moisture. For breeding populations we provide a water reservoir for egg laying. Frogs are fed every other day alternating food sources between pinhead crickets and wingless drosophila. We keep the frogs in a perpetual mating season, providing them with an abundance of water to mimic the natural rainy season. The light cycle is set to provide 14 hours of daylight conditions and 10 hours of night. In order to keep records on brood heritage, we isolate male/female couples in 1 gallon aquaria and provide mating conditions. The resulting offspring are separated into their own aquarium and labeled, allowing us to keep track of brood lineage. The froglets that are not used in specific experiments or bred are kept in a pseudo-terrarium holding pen where they mature to adulthood. 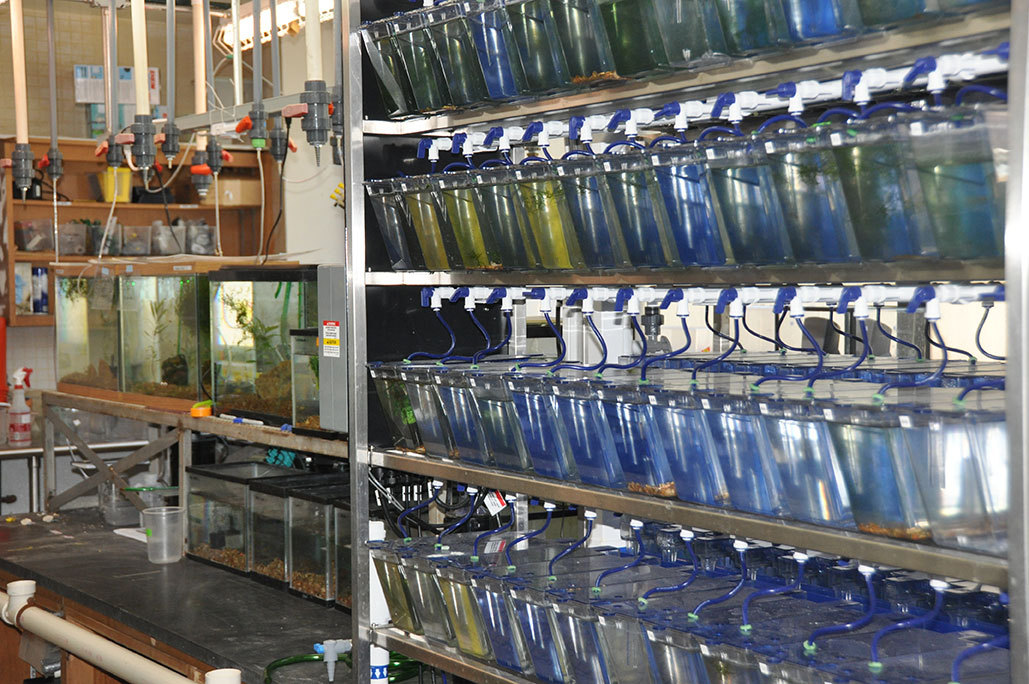 The room is equipped with an overhead flow-through water and air supply system that allows us to easily maintain up to 90 tanks at a time, as well as an Aquatic Habitat system that houses up to 250 fishes in isolation. Our lab primarily houses populations of Northern Swordtails and Mollies.

Located 15 minutes from UT main campus, Brackenridge Field lab is owned by the University of Texas, and serves as a field lab for UT researchers. The Ryan lab maintains populations of Swordtails and Mollies for various behavior experiments. These populations are kept with little to no maintenance in 34 stock tanks (3200 liters each) located at BFL. Water is provided using a flow-through system. Aquatic vegetation is used to provide shade, attract food sources, and create a natural environment for the fish and other invertebrates. And during colder months, cattle-trough heaters are used to keep water temperatures above freezing. There are also smaller in ground tanks that can be utilized for specific experiments. 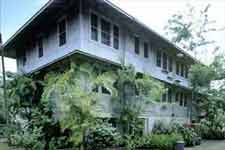 The Ryan lab has been doing research on túngara frog behavior at the Smithsonian Tropical Research Institute (STRI) in Gamboa, Panama since 1987. Gamboa is a small town located in Central Panama on the banks of the Panama Canal. It is adjacent to Parque Soberania with a rich tropical fauna and flora. Pipeline Road crosses the Park and provides access to the forest and a series of small streams. In Gamboa there are furnished apartments with internet connections for rent to visiting researchers. Under the apartments are several laboratories and common rooms including our two frog labs with a semi-anechoic chamber fitted to do phonotaxis experiments, and another with 8 smaller sound isolation chambers fitted for playing calls to individual males and recording their evoked responses. Go to this website to get an idea of what life in Gamboa is all about.

Several concrete ponds and an observation room are located at the Santa Cruz site at the edge of the forest in Gamboa. These ponds are used for observation and experimentation of túngara (and other frogs) breeding in the field. A large flight cage (left), also in the Santa Cruz area, is used for studies of Trachops cirrhosus, which commonly occur in the nearby Pipeline Road area of the Soberania National Park. 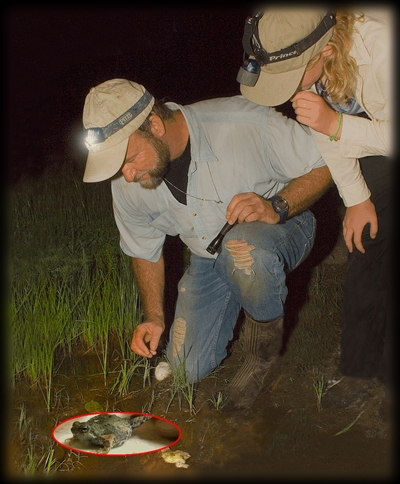 We have conducted studies of túngara frogs throughout its entire range, at more than 30 sites from northern Mexico to the llanos of Venezuela. The majority of studies are concentrated in central Panama at STRI facilities near Gamboa Panama. On the left, tungara frogs only seem that big when you haven't found one for a while. Here my daughter Lucy and I are frogging for tungaras.

Field studies of swordtails are conducted in northeastern Mexico, in the foothills of the Sierra Madres Orientalis, mostly in the state of San Luis Potosi. The fishes are found in the clear, cool spring waters of nacimientos. At the left is a photo of the Nacimiento of the Rio Choy where we conduct studies of Xiphophorus nigrensis. 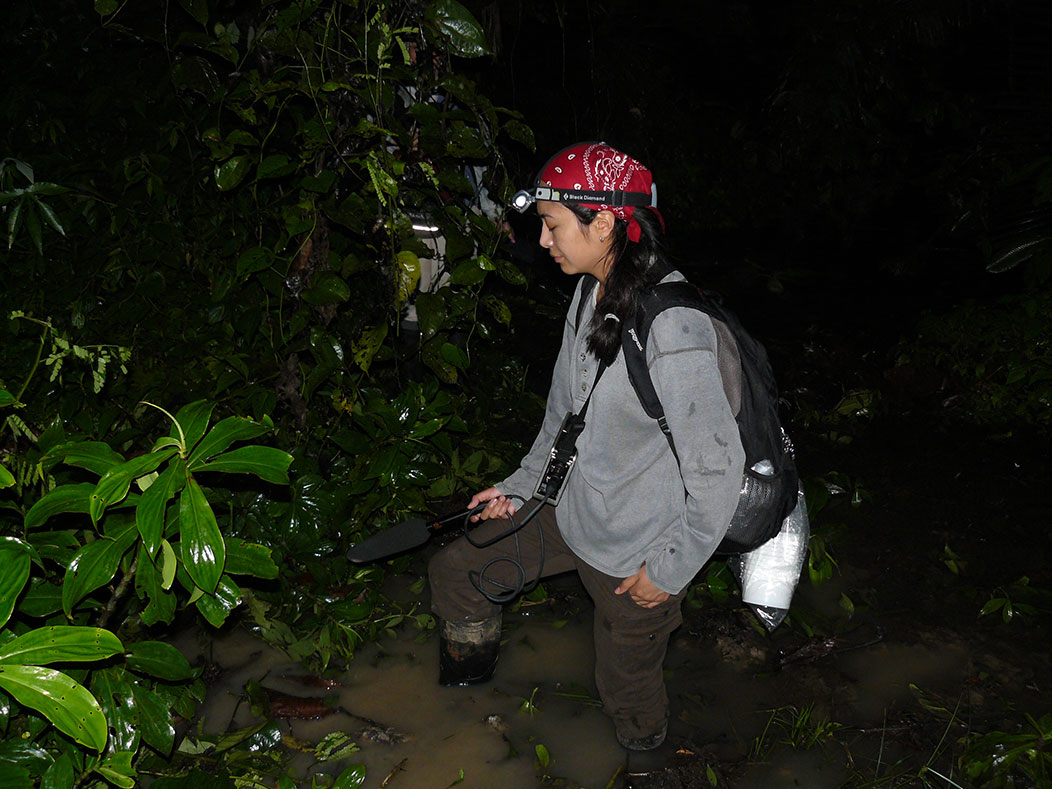 Numerous species of Physalaemus are found in Ecuador where we have studied them in both Amazonia and on the western side of the Andes. The pair of species Physalaemus petersi-P. freibergi are sister to P. pustulosus. Studies by Monica Guerra (left) in the Amazon concentrate on their sexual communication system.