Current research efforts are focused primarily in synthetic and bioorganic chemistry and in chemical biology. The central theme of our work is the synthesis of compounds of natural or unnatural origin that have possible applications in medicine and biology. These compounds, which are often architecturally complex, serve as targets of opportunity to discover new synthetic tactics and strategies that fill voids in available methodology and that have general utility. The biological activity and profiles of selected compounds are studied with the goals of identifying potential therapeutic leads and novel tools to study biological function. Areas of particular interest are cancer, neurodegenerative diseases, and neurological disorders. Several projects that are exemplary of current and future work are outlined below.

We recently completed a total synthesis of the unique alkaloid actinophyllic acid by novel and efficient strategy that involved a remarkable cascade of reactions to deliver a key tetracyclic intermediate in a single operation. We then prepared a number of analogs of this intermediate and discovered that several rapidly induced cell death in a number of cancer cell lines. This finding led to a series of studies directed toward elucidating the biological mechanism by which these compounds killed cancer cells.

Other natural products of current interest include the indole diketopiperazine alkaloids such as gliocladin C and glioclatine. Our approach to this family of cytotoxic alkaloids involves a facile process for assembling the essential elements of the skeleton in two steps from isatin, an unsaturated diketopiperazine, and indole.  Another indole alkaloid of interest is arboridinine.

Inspired by chemistry we had invented to solve a problem in alkaloid synthesis, we developed a general strategy for the preparation of collections of small molecules having heterocyclic scaffolds that are commonly found in drugs and biologically active natural products. The key feature of this approach is a versatile multicomponent assembly process (MCAP) to generate intermediates that bear orthogonal functionality. These functional groups are then selectively paired in various ring forming reactions to give functionalized products that can be further diversified via cross-coupling and other reactions. This work has led to the discovery of some selective and potent compounds that may be useful for studying and treating cancer, neurological diseases and disorders, hepatitis C, tuberculosis, African sleeping sickness, as well as a number of other diseases. Of particular interest are compounds that bind to the sigma 2 receptor, a receptor that has not been fully characterized but that is overexpressed in cancer cells and is found in the central nervous system. We have identified molecules that modulate this receptor that have neuroprotective and procognitive effects and are promising leads for Alzheimer's disease and other neurodegenerative diseases, traumatic brain injury, substance abuse, and neuropathic pain. 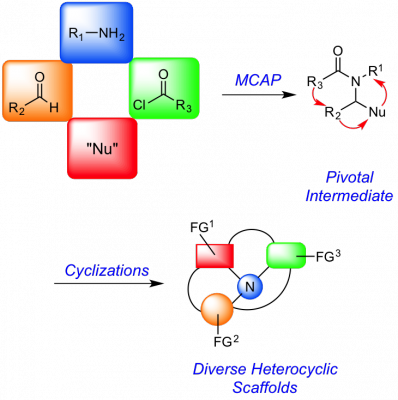 We are also involved in a collaborative project with a team of neurobiologists to develop a virus-based, light-gated reporter system that may be used to monitor changes in neuronal activity during the performance of cognitive tasks. In our part of the project, we are designing novel caged derivatives of derepressor ligands that are inactive in vivo, but that can be converted upon irradiation with visible light into active compounds that restore reporter expression in bidirectional, differentially-regulated vectors.

A key step in the process of identifying new drugs is designing compounds that exhibit high affinities and specificities for medicinally-relevant proteins. However, success in these ventures relies upon an explicit understanding of how variations in the structures of a small molecule affect their relative protein binding energetics. Toward this goal, we have adopted a multidisciplinary approach in which we examine how changes in conformational flexibility and nonpolar surface of small molecules affects binding enthalpies and entropies, nonbonded interactions, and dynamics in their complexes with SH2 domains and hepatitis C viral protease, proteins that are of medicinal interest.

We have made a number of important discoveries in this field. For example, it is commonly assumed that preorganizing a flexible ligand in the three dimensional shape it adopts when bound to a protein will provide a derivative having an increased binding affinity, primarily because the constrained molecule is expected to benefit from a lesser entropic penalty. However, we found that preorganizing small molecules that bind to the Grb2 SH2 domain in their biologically active conformation does not necessarily result in the expected entropic benefit, and more rigid molecules may have higher affinities because of more favorable binding enthalpies. We have also observed the energetic effects associated with increases in the nonpolar surface area of a small molecule are not purely entropic in origin and that protein-ligand interactions can be dominated by enthalpy driven hydrophobic interactions. Clearly, a better understanding of the factors that contribute to energetics in protein-ligand interactions is needed, and until then standard paradigms that are used during drug discovery campaigns must be applied with caution. 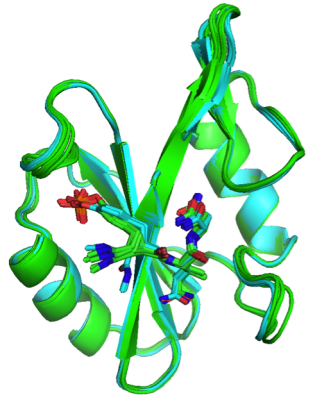 We thank The Robert A. Welch Foundation for their generous support of our research programs.