In order to understand the importance of estuarine habitats to focal species it is necessary to identify the primary trophic pathways supporting their production.  I am particularly interested in how foraging patterns of various species may link adjacent habitats and represent important energy and nutrient subsidies.  I have combined stomach content analysis, stable isotope analysis and behavioral studies to better understand trophic connections in mangrove and oyster reef systems. More specifics below: 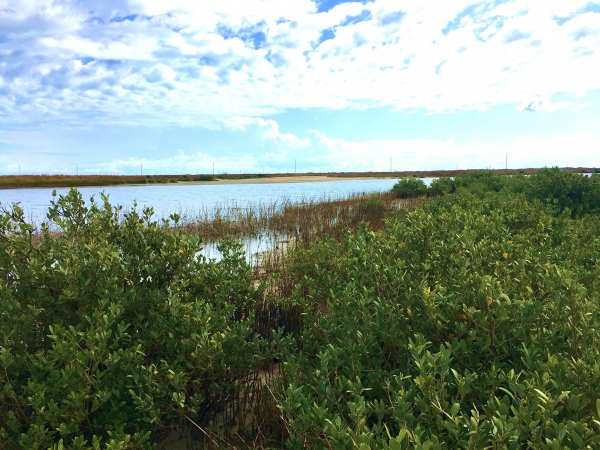 Climate-driven expansion of black mangroves (Avicennia germinans) into Spartina alterniflora salt marshes will likely be one of the most dramatic effects of global environmental change in the Gulf of Mexico . Winter climate-based models of mangrove forest distribution predict that 95% of  LA, 100% of Texas, and 60% of Florida salt marsh habitat may be under threat of mangrove expansion if temperature increases between 2-4°C (Osland et al 2013). These expansions have the potential to fundamentally change the function of coastal wetland ecosystems through altered geochemical cycling, sediment accretion and carbon burial, and provisioning of habitat for terrestrial and aquatic species.

Coastal wetlands are known to be important sources of trophic support for many sub-tidal estuarine species and shifts between dominat vegetation types will likely alter avialble food resouces and predator-prey interactions.  Our lab is investigating the effects of mangrove enchraochment on predator foraging rates and predator and prey communty composition to understand how climate-realted habitat shifts may affect sub-tidal nekton communities via altered food web linkages. 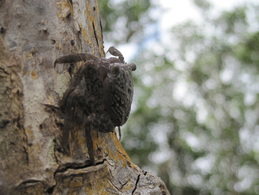 Many studies of terrestrial-aquatic food web subsides have focused on the role of passive subsides or movements of prey associated with ingrained life history patterns (i.e., insect emergence). However, plastic, behavioral responses of shared prey to multiple predators may also be important in mediating food web subsidies.  The mangrove tree crab Aratus pisonii is primarily arboreal/terrestrial, but will jump into the water to escape predation by birds making them vulnerable to fish predators. They are also one of the only species besides insects that feeds directly on green mangrove leaves. We are studying the effects of both predators on crab behavior, how risk varies across the land-sea interface, and how this may control contributions to fish  diets. 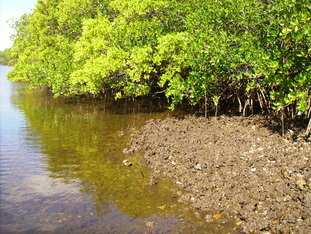 Part of my research has involved creating an energy flow food web model for a sub-tropical oyster reef, focusing on trophic pathways important in supporting production of snapper, in addition to other fish consumers. Most previous studies have focused on the functional relationships within oyster reef food webs, especially in temperate systems. This research is among the first to focus on energy flow pathways, particularly in a sub-tropical system. Findings suggest that the primary trophic pathways may be quite different than classic models from temperate systems, even when the focal organisms are similar. Ongoing collaborations are addressing how the relative importance of key trophic connections (oyster-mud crab) may vary when viewed from energy flow and functional perspectives. 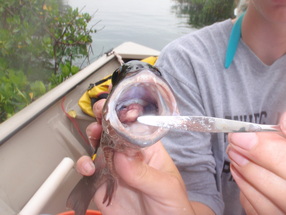 Habitat generalists are faced with varying biotic and abiotic conditions across their landscape. Because they maintain such a wide distribution, these generalists may encounter varying prey quality and quantity throughout their range. Optimal foraging models predict that predators should select prey for which energy lost during search and pursuit is compensated for by the energy content of the food. One component of my research examined how a generalist predator (gray/mangrove snapper) undergoes foraging trade-offs across its landscape and the effects of such a trade-off on fitness. This research focused in the Loxahatchee River and estuary, Florida, USA.