The karst systems of west and central North America are home to a number of fascinating cave fishes, including four catfishes that have held our interest for some time. This page discusses all four, their general distributions and habitats, and what they have in common. The bold, italicized links go to more details, as do links in the sidebar menu. There are:

One from the adjacent Edwards-Trinity aquifer of more arid south Texas and northern Coahuila, México:

Specimens of all of them are rare in collections. All were described on the basis of very few specimens, and the last is still known from only 5 specimens. You won't find many critters on this planet much more challenging to study. The dates of their scientific descriptions are listed above, and we still know very little about most of them. However, what little we do know of these species and their habitats, indicates that they are in many ways much like deep sea fishes, which Devine et al. 2006 pointed out "are highly vulnerable to disturbance because of their late maturation, extreme longevity, low fecundity and slow growth" (see Mexican blindcat page) and, though clearly the blindcats are not being fished, they are effectively being harvested by aquifer mining and other forms of impact decreasing their habitat.

The first two were originally collected by hand from water flowing from artesian (natural pressure, so not requiring pumping) wells, but these days they can only be obtained by netting them from water wells, almost all now pumped, that supply water to the city of San Antonio. Furthermore, most wells are now plumbed directly into the city's treatment plants and municipal water distribution system, complicating getting a net into the system, and all water use is carefully controlled so diverting some to pass through a net is not permitted, or if it is, someone has to pay for all that wasted water. There are thousands of wells in the Edwards Aquifer, but these fish come only from those few that are more than 300m deep. Short of drilling a huge-diameter well big enough to send a submersible down it, there's no way humans will ever get down there. And if that's not enough to keep us from learning more about them, water managers are sometimes not keen to let anyone learn more about these rare fishes that they think likely to one day be listed as endangered.

The Mexican Blindcat is by far the easiest to collect. It has been known to show up in well buckets dropped into shallow hand-dug wells, and from a few caves that after big rains sometimes burp them up to the surface. But mostly we find them after rapelling 30 - 100m down mostly vertical caves to underground, intermittent and very flood-prone desert streams in total darkness.  The Phantom Blindcat so far has only been found by cave divers.

They're all amazing in many ways, and, living in aquifers of great importance to humans, they (and the many aquifer-obligate invertebrates that live with them (Figure 1) can be used to inform us about the extents and general health of those hugely important resources. The more we know about them, the more we can use that knowledge to help sustain the human economies dependent on their aquifers. 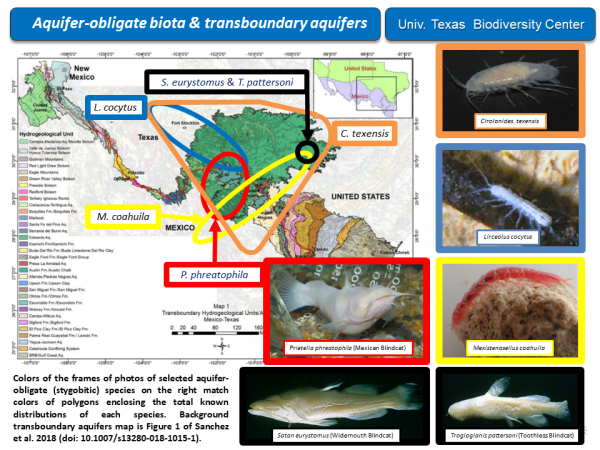 Distributions of blind catfishes and selected invertebrates living in the Edwards Aquifer (dark green in map) - living evidence that this aquifer extends under the Rio Grande and is internationally shared by Texas and Coahuila. Research on these organisms has great potential to improve our knowledge of the nature and extent of aquifer inter-connections across this vast, valuable and rapidly diminishing water supply.

Our explorations of the morphology, DNA, habitats, ecology, and evolutionary history continue to provide surprises and conservation conundrums, and generally keep us entertained and having fun!

We have permanently archived some of our publications and most recent presentations on these species in UT Scholarworks.