The effects of climate change during the next 50-100 yrs will largely determine shifts in habitat type and quality, as well as the potential to use habitats for biofuel production. Although decreasing precipitation is expected to reduce plant productivity, the severity of impact will depend on the magnitude and frequency of altered rainfall, physiological tolerance envelopes of species, as well as the ability of switchgrass to acclimate or adapt. As such, a major goal of climate change ecology is to determine responses of target plant species under realistic field conditions. Here, we will use sophisticated field rainout shelters and realistic planting densities to explore switchgrass responses to predicted climate. To understand gene expression responses to drought we will implement RNA-sequencing on various switchgrass varieties under different drought regimes. Further, collaborations with multiple USDA field stations will allow for studying switchgrass response across many ecological regions. Geographic data will be integrated with previously developed yield models to predict switchgrass response across the landscape.

The primary goals of this project will be to 1) Estimate the environmental and genetic variability for drought-related traits, overall physiology, and performance among diverse Panium virgatum varieties grown under future climate environments; 2) Identify drought-tolerant P. virgatum varieties for further study and potential biofuel use; 3) Expand our understanding of switchgrass physiology x environment interactions as well as the degree of geographical genotype x environment interactions through collaborative field trails; 4) Predict switchgrass productivity with future climate change using the genomic, physiological, and ecological data from this work to parameterize simulation models; 5) Determine gene expression response to drought across ecotypes.

The agronomic development of switchgrass as a biofuel crop has focused primarily on Panicum virgatum. Unfortunately, P. virgatum is a complex polyploid (both tetraploid and octaploid series exist), has a large genome (1C > 1500 Mbp) and is thus not easily amenable to traditional molecular genetic studies. In contrast, the closely related diploid species Panicum hallii has a much simpler genome (~500 Mbp) and can provide a genetic reference to support and interpret parallel studies in P. virgatum. Importantly, P. hallii occurs over the same moisture gradient as P. virgatum in the southern Great Plains and has locally adapted mesic (var. filipes) and xeric (var. hallii) ecotypes.

We are currently developing P. hallii as a model genomic system through high-throughput genomic and transcriptome sequencing. Our goal is to understand the genetic basis of natural variation in drought tolerance and biofuel related traits through a combination of high-density genetic mapping with RNA-sequencing. This aim will be achieved by leveraging distribution of natural drought adaptations distributed along the steep cline in soil moisture across Texas and the desert Southwest. 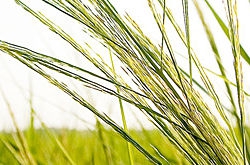