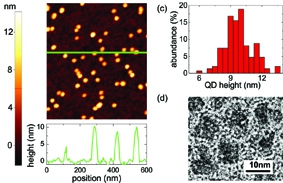 There is an apparent size mismatch between modern electronic and photonic devices. While current electronic devices are routinely fabricated on the scale of tens of nanometers, photonic devices are limited to scales comparable to the wavelength of light - typically a few hundreds of nanometers - due to diffraction. We are hoping to circumvent this limitation by examining the interaction between illuminated semiconducting and metallic nanoparticles. Metallic nanoparticles (10 to 100 nm in diameter) provide the means to shaping and guiding optical fields on a smaller scale, moving beyond the diffraction limit.

In one study, we used an Atomic Force Microscope (AFM) to assemble well defined hybrid nanostructures consisting of both semiconductoring quantum dots and metallic nanoparticles. The fundamental light emitting properties of the quantum dot is drastically changed by both a modified electromagnetic environment (the “Purcell” effect) and energy transfer between the two types of nanoparticles.

Imagine trying to read an article with the newspaper rolled up. This is a frustrating experience as on

ly limited information can be accessed at a glance and overlaps between the lines of the text can make it difficult to read clearly. Researchers using optical spectroscopy methods had to deal with this issue until the recent development of multi-dimensional spectroscopy. Using this new technique we are now able to access information in two or more dimensions, unraveling previously congested one-dimensional spectra. We are one of the first groups introducing this powerful concept to the study of semiconductors on ultrafast time scales. We hope to extend the method to the ultimate limit of studying a few quantum dots - essentially customized solid-state atoms.

Using this technique, we have studied exciton correlations in semiconductor quantum wells, the quantum-confined structures widely used in solid state lasers and LEDs. An exciton is an electron-hole pair. The Coulomb attraction between the electron and the hole leads to a “positron-like” quasiparticle. These charge neutral composite quasiparticles interact with each other via residual Coulomb interaction. Such interaction will change the photon emission statistics of the quantum wells. A single 2D spectrum can identify couplings between resonances, separate quantum mechanical pathways, and distinguish among many microscopic many-body interactions.

The spin-transfer (or spin-torque) phenomenon refers to a novel method of using an electrical current to manipulate spins in magnetic nanostructures. This effect offers unprecedented spatial and temporal control of spin distributions.

We have experimentally studied the diffraction of spin waves propagating in a Permalloy-film microwaveguide from a submicrometer-sized circular defect. For microwave excitation above the cutoff frequency of the fundamental transverse mode, the defect leads to a frequency dependent reflection of the spin wave. The efficiency of the reflection appears to be dependent on the wavelength of the incident spin wave in a nonmonotonous way. The observed two-dimensional spin wave distribution pattern after the defect can be understood based on the interference of several copropagating modes, suggesting that the defect couples the fundamental mode with higher order modes.