What use are character tables?

At this point a good question is: what's the point of learning about character tables? The simple answer is that the symmetry and associated character table of a molecule can be used to interpret and predict many aspects of chemically significant spectroscopies as well as bonding. We will illustrate this next by focussing on the vibrational modes of a molecule.

In the laboratory we can gather useful experimental data using infra-red (IR) and Raman spectroscopy. This data can be compared to the number of IR and/or Raman active bands predicted from the application of group theory and the correct character table. The mathematics (group theory and matrix algebra) behind this treatment serves as a solid theoretical foundation. The manipulations described below work because all the symmetry operations of a molecule comprise a mathematical group and obey the rules of the group. As noted previously we do not have to master this area of mathematics in order to make good use of character tables.

Degrees of Freedom and Vibrations in Molecules

Here we will initially discuss the degrees of freedom for a simple molecule (water). We will very quickly see why it is very beneficial to employ symmetry when investigating larger molecules.

For a molecule with "N" atoms there are 3N degrees of freedom (remember we live in a 3-dimensional world of x, y, z coordinates). For a non-linear molecule 3 degrees of freedom can be signed to translations - movement of a body as a whole (Tx, Ty, Tz) and 3 to rotations (Rx, Ry, Rz). The remaining motions of the atoms are displacements of the atoms from their mean positions - the center of gravity does not change. These fundamental vibrations are referred to as "normal modes". Thus, a non-linear molecule has 3N-6 normal modes. For water the number of normal modes is 3 (3 x 3 - 6 = 3). For linear molecules there are 3N-5 normal modes.

For water, which of course has been intensively studied we know that the 3 vibrations are as follows. 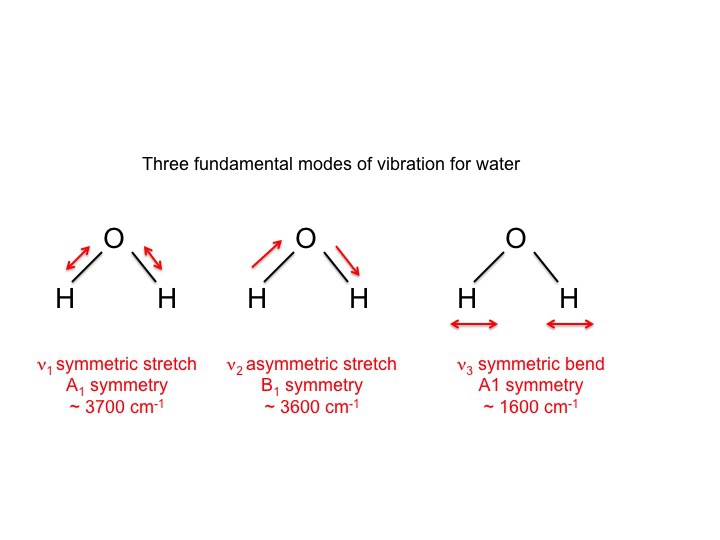 The symbols used to describe these modes (A1, B1) are the same Mulliken symbols that we encountered in our discussion of character tables. In other words, the vibrations, which are molecular properties, can described by symmetry species or irreducible representations. In fact much of the literature involving vibrational spectroscopy uses these symbols as a shorthand way of communicating information.

It should be pretty obvious that the number of vibrations increases rapidly with even modest increases in the number of atoms in the molecule. Determining the kinds of vibrations by inspection (as we did for water) now becomes much more difficult. For example consider the following compounds:

For the case of water we could present the character table (C2v) with the 3 vibrations (ν1, v2, v3)  listed in the column of molecular properties as shown below. (ν = Greek symbol "nu") 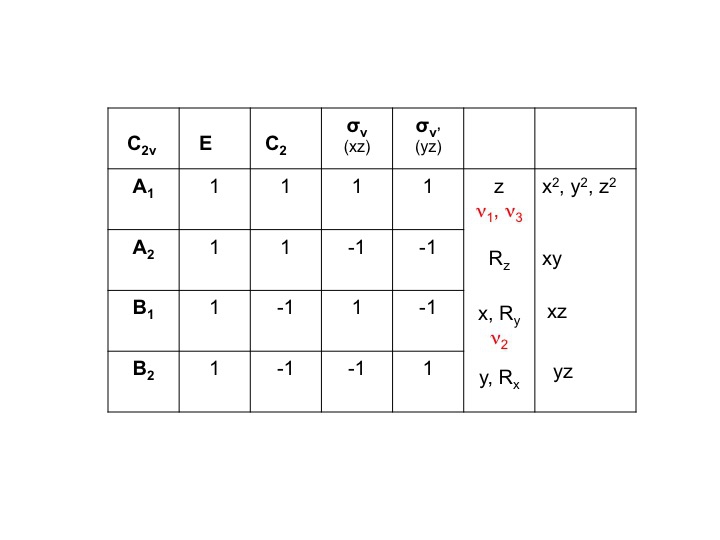 However, in general this approach is impractical. Take pyridine (C5H5N) for example. The point group is also C2v but the molecule has 11 atoms. The number of fundamental modes of vibration is 27 ( 3 x 11 - 6 = 27).

In this case we would have to draw up a C2v character table showing the symmetries of all 27 vibrations. For this reason vibrations are not normally included in character tables. Instead it is up to the user (you) to determine the number and type of vibrations (as defined by their symmetry species) for any molecules that are encountered. How we do this is described below.

For example, for water the symmetries of the translations (Tx, Ty, Tz) can be gleaned directly from the C2v character table. They are A1, B1, and B2. We can represent all three of these degrees of freedom by a representation ΓT and we can write the expression below. (Γ = upper case Greek letter "gamma").

We know that A1, B1 and B2 are merely the shorthand notations for the symmetry species (irreducible representations). We can therefore simply write down the characters of ΓT by adding the individual characters for A1, B1 and B2 from the C2v character table. 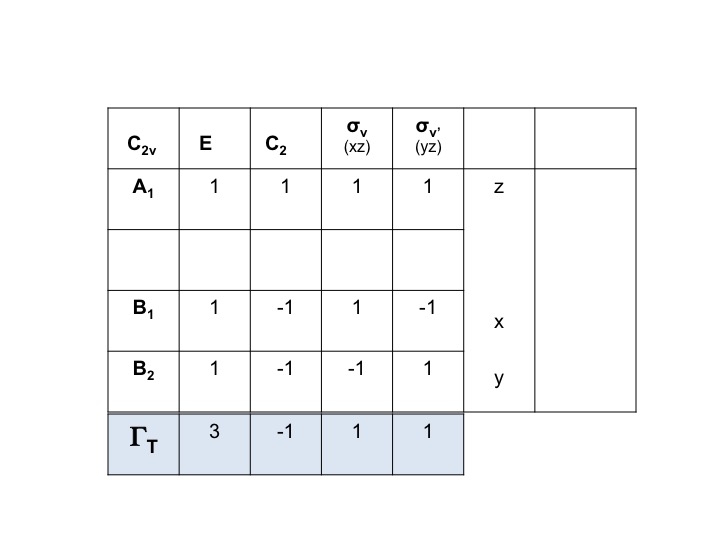 This is a valid reducible representation and a member of the C2v group.

In a similar manner we can write down the reducible representation for all three rotations and all the vibrations. 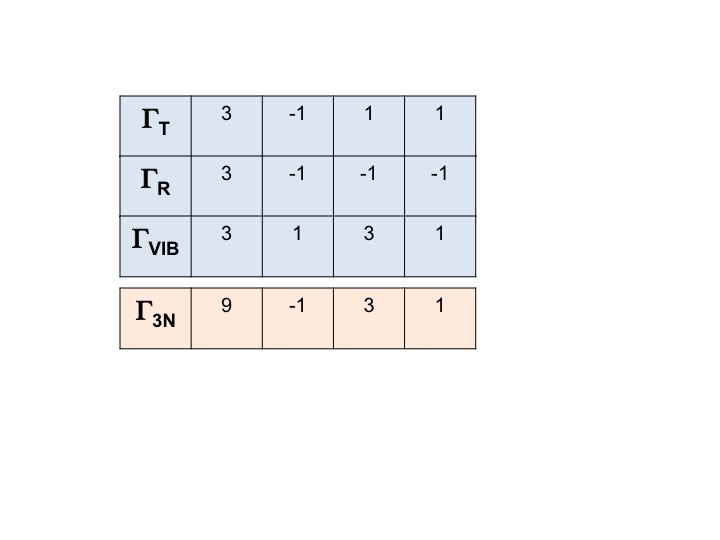 and the reducible representation for it is obtained by simply summing the characters for ΓT, ΓR and ΓVIB.

Make a note of this  - it will come up later!

Although the set of characters 9 -1 3 1 is a valid member of the C2v group it is not particularly useful when discussing  molecular properties. What is really required is the language of the shorthand symmetry species (Mulliken symbols, A1, B1 etc.). In other words we want to express Γ3N in terms of A1, B1 etc. From the information covered above it can be easily shown by inspection that:

The good news is that for other more complex molecules we do not have to perform this task by inspection because:

1. We can easily generate Γ3N as a reducible representation for a molecule (if we know its point group symmetry).

2. We can easily convert the Γ3N reducible representation into the sum of its symmetry species (Mulliken symbols) using a "simple" formula known as the reduction formula.

Take the character table for the molecule and add a row at the bottom. In this row generate the reducible representation for ΓT (or Γxyz) as we did above, simply by adding the characters for each operation which correspond to the molecular properties for x, y and z. For C2v we have already shown that these are the characters corresponding to A1, B1 and B2. 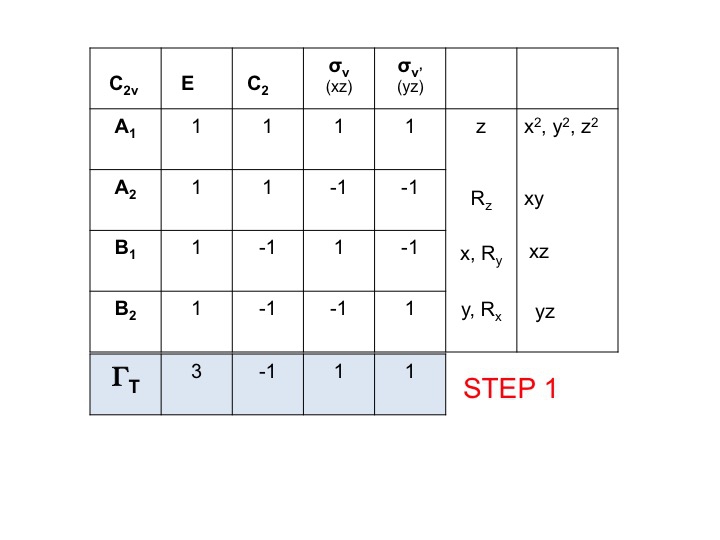 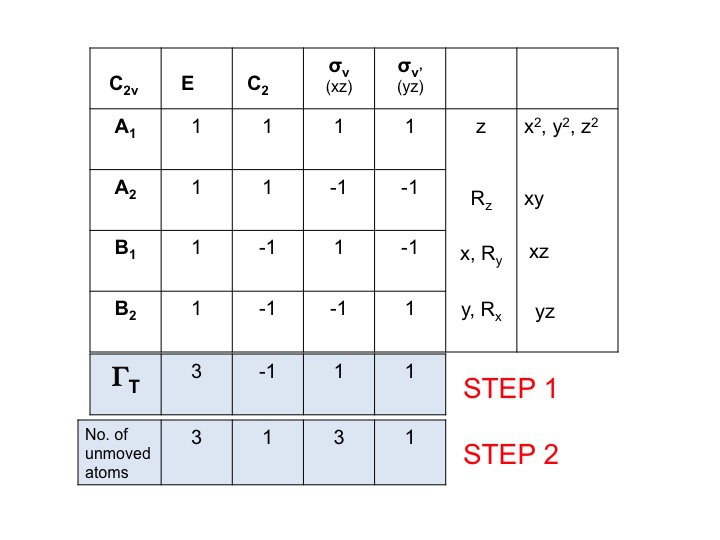 Thus for water (3 atoms) under E there are 3 unmoved atoms, but for C2 both H's move but since the O atom sits on the C2 axis it does not change its location and so we record 1 under the C2 column. The new set of numbers generated in step 2 (3 1 3 1) is also a reducible representation in C2v and obeys the rules of the group.

In this step we simply multiply together the characters that have been generated in steps 1 and 2. The result (third row) is the reducible representation for Γ3N (or ΓTOT). Its that simple. 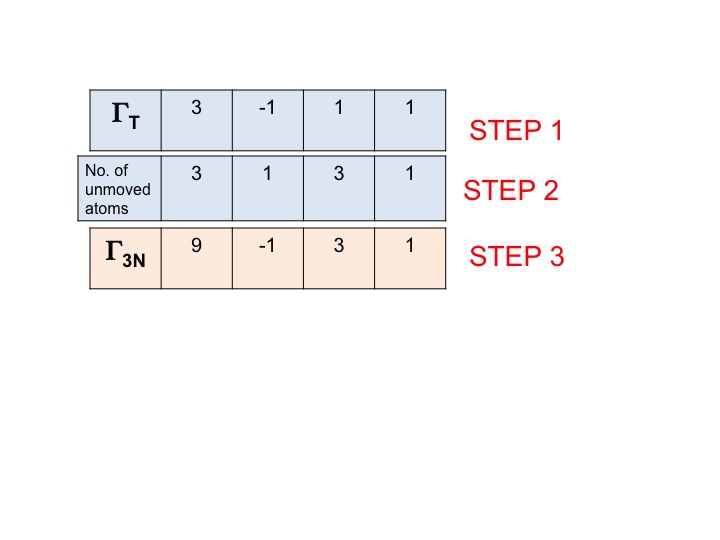 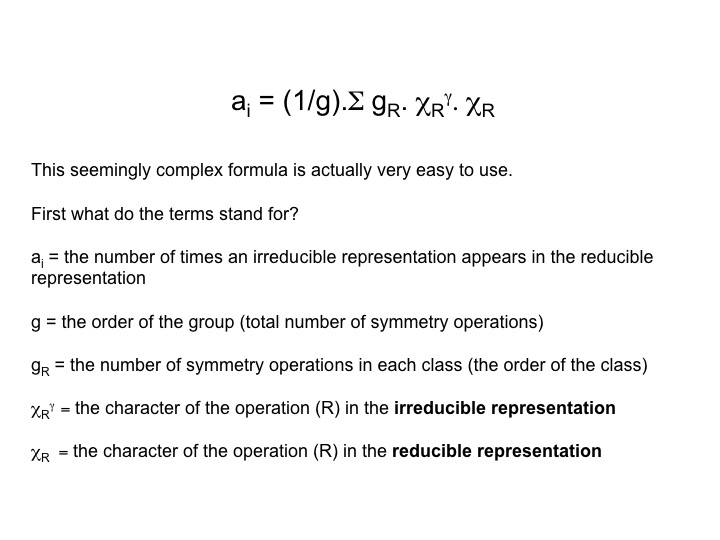 You can easily find this information in the character table: 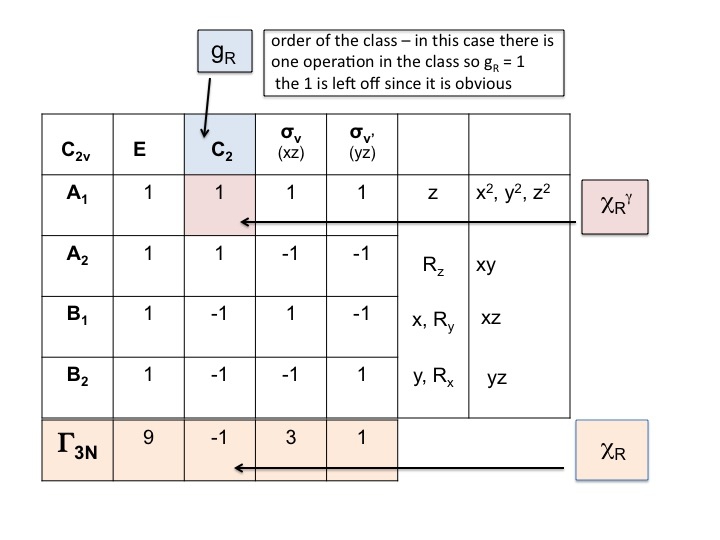 The number of times A1 appears in this representation is therefore

We can now write Γ3N = 3A1 + A2 + 3B1 + 2B2  (exactly what we got by "inspection" above. We can now subtract the symmetry species for the translations and rotations and this will give us the number and symmetry species of the fundamental modes of vibration. ΓT and ΓR can be obtained directly from the character table.

So the three normal modes of vibration for water have the symmetries A1, A1 and B1.

We now have a general method for determining all of the fundamental modes of vibration for a molecule and expressing these modes in the shorthand language of Mulliken symbols. This is one of the exercises that you will be tested on in Exam 1. The best way to become confident with this method is to practice as many possible examples as you can!